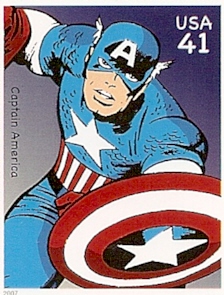 The underlying concern was that the name “Captain America” might negatively impact international box office numbers in some countries due to Anti-Americanism and a general distrust of American foreign policy- notwithstanding the potential brand recognition attached to an over 70 year old comic book hero.

Paramount Pictures reportedly gave international distributors a choice: Call it Captain America: The First Avenger or truncate it to The First Avenger - but no other variations. In the end, only Russia, Ukraine and South Korea opted to shorten the movie's title.

Given the true history and nature of Captain America's character, however, no country should have had to change the movie's name: Far from being an icon of American jingoism, this superhero often has been one of his nation's most trenchant critics.

On the surface, the reasons for concern are understandable. Outside of comic-book fandom, all that most people think of when they hear the name "Captain America" (or even just look at the guy) is an over-the-top American propaganda figure. Let's face it: Cap's costume is heavily dominated by stars and stripes. It's like Betsy Ross and Edna Mode teamed up to design the outfit. Many observers simply assume that he is a creature of the Pentagon spin machine. Indeed, an informal survey of media coverage of the upcoming Captain America movie found news outlets from CNN to Fox News to the BBC stating that the superhero with the star-spangled shield was created as a propaganda tool for the U.S. war effort during the Second World War.

That is a major misconception: The first issue of Captain America was published by Timely Comics (later Marvel Comics) in December 1940, a full year before America's entry into World War II. 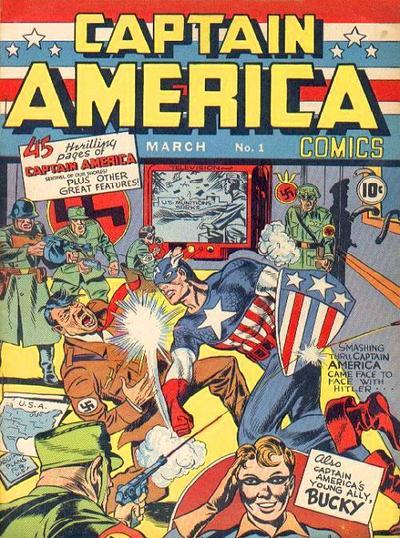 At that time, the American mood towards the war in Europe was largely isolationist: There were still many Americans who wanted the United States to stay out of what was then seen as a European war and none of America's business.

Of course, there were also a number of Americans who took the opposite view. One of them was FDR. Others were hawkish media figures who led a subtle push toward military involvement through movies, radio, newspapers and, yes, even comics.

In the latter case, the push was not always so subtle: The cover of the first issue of Captain America featured a splashy full-colour rendering of the red, white and blue clad superhero punching Adolf Hitler right in the face. Believe it or not, it was a controversial image back in the day.

For Captain America's creators, the legendary Jack Kirby and Joe Simon, both the character and the punch were no accident. Like many Jews in America at the time, Kirby and Simon were concerned with the news coming out of Nazi Germany. The political message behind an American superhero who was ready, willing and able to take on the Nazis was intentional. Simon said in an interview years later that, "the opponents to the war were all quite well organized. We wanted to have our say, too."

After its initial publication, the now-famous Hitler-bashing cover resulted in threats and hate mail for the authors. The underlying patriotic wartime themes of Captain America were embraced by official government propaganda only much later - after the attack on Pearl Harbor.

Sales of Captain America comic books trailed off significantly after the end of the Second World War, and it eventually ceased publication. But 20 years later, the character was revived by another comic-book legend, Stan Lee, who concocted a story about Cap being frozen in suspended animation since 1945, and revived by a newly formed superhero group, The Avengers, in 1964.

In the February 1970 issue, Cap is seen wandering the streets of New York, contemplating the then-current social revolution. Thinks Cap in a classic Marvel comics thought bubble: "And in a world rife with injustice and endless war . Who is to say the rebels are wrong? But, I've never learned to play by today's new rules! I've spent a lifetime defending the flag, and the law! Perhaps I should have battled less, and questioned more!"

Later, Cap bolts out of bed and says of the establishment: "It was the same establishment that gave them a Martin Luther King, a Tolkien, a McLuhan, and a couple of brothers named Kennedy! We don't claim to be perfect . no generation is! All we can do is learn to live with each other - learn to love one another."
Not exactly gung-ho American conservatism, that. It was the kind of nuanced reflection that was a rarity in the anti-establishment era. 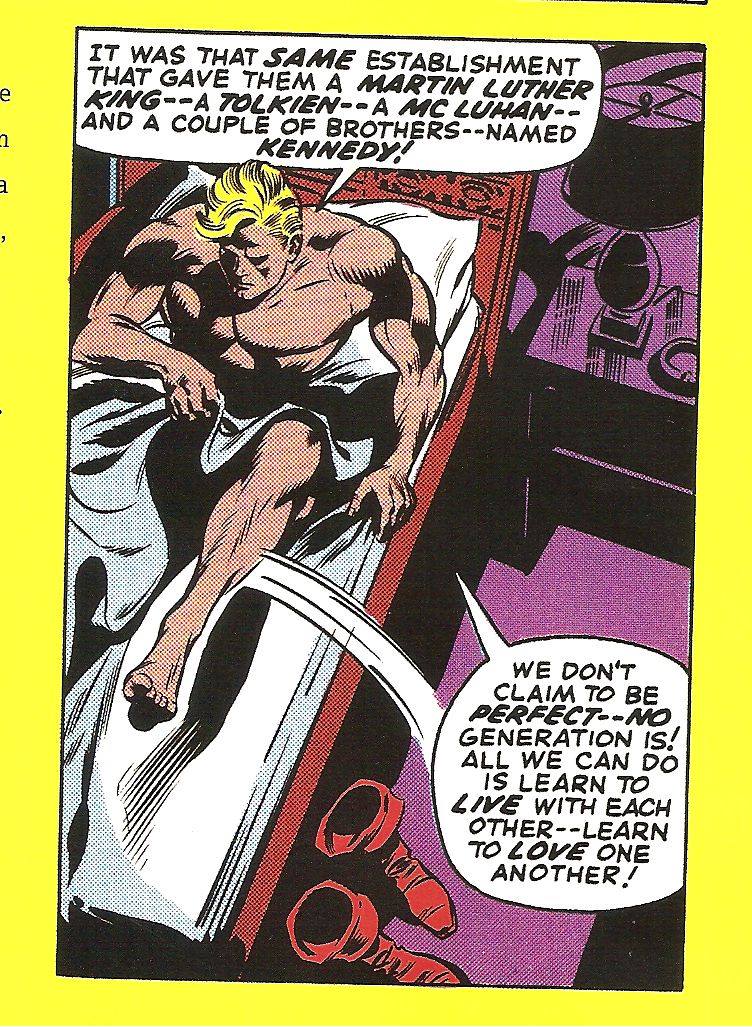 A little later in the 1970s, when Watergate rocked America, the Marvel Uni-verse produced its own fictional version of the scandal - and Captain America was front and center.

A subversive terrorist organization known as The Secret Empire attempted a coup d'état against the United States. The group was stopped by Captain America. Later, Cap learns that the leader of the Secret Empire was none other than the president of the United States (who, at that time, of course, was Richard Nixon). The actions of The Secret Empire and their connections with the commander-in-chief were covered up. Like Joe Simon and Jack Kirby many years before him, writer Steve Englehart openly admitted the political intentions of the story; it was definitely meant to be an allegory to Watergate. 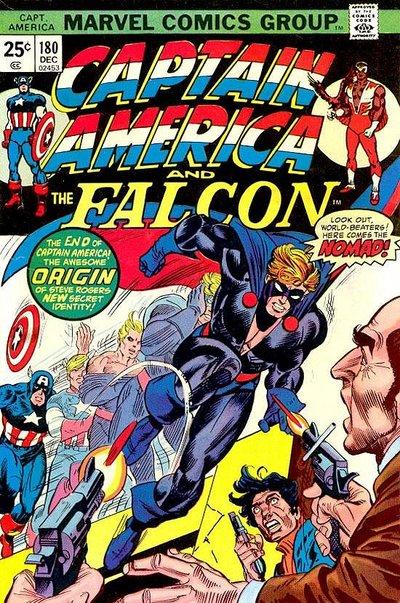 Captain America, disillusioned by the whole affair, dumps his American red, white and blue costume, and takes on the identity of Nomad (the man without a country - get it?). It was around the same time that Cap took on The Falcon, one of the very first African American superheroes in mainstream comics, as a sidekick. Captain America was no Archie Bunker in tights.

Fast forward to the George W, Bush era, and you find that the Marvel Universe in general, and Captain America in particular, were still commenting on the times. In a story-line that mirrored the real-life Patriot Act, the fictional U.S. Government passed the "Superhuman Registration Act," requiring all persons with super powers to register with the government as "a human weapon of mass destruction." The superhumans also were required to reveal their true identities and submit to government training. The creed of the post-9/11 era was: "You are either with us or against us." Captain America was most decidedly on the "against us" side: He opposed the Act and refused to register, arguing that such legislation was an infringement of American civil liberties.

Actually, he didn't just argue. He fought. Hard. And a lot. And against his former friends and allies such as Iron Man. Captain America, the onetime "sentinel of liberty," finally went into hiding as a mall cop.
Finally, and begrudgingly, Cap did "the right thing" and surrendered, preferring instead to fight the rest of his political battles in court. But while Cap was being brought into the court house, he was shot by a sniper. Then, Sharon Carter, a SHIELD agent and Cap's former lover, also known as Agent 13, finished the job and killed Captain America. 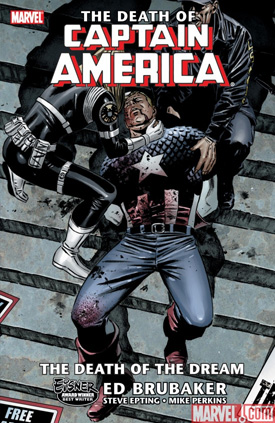 She was, of course, under the influence of the bad guys at the time. Nonetheless, the circumstances are telling: Captain America was killed by a federal agent while defying the actions of his government in a time of war. The story behind the death of Captain America certainly did not reflect the mainstream jingoism of the post-9/11 Bush Era.

All of which to say: Anyone who understands Captain America's story should understand that the title of the movie should not have been changed - because he is the farthest thing from an icon of unthinking American sabre-rattling. Doing so serves only to fortify misconceptions surrounding a character who has wrestled, more than most real-life thinkers, with the question of what it means to be "American."

Reprinted courtesy of the The National Post
www.national post.ca
Posted by Terence Bowman at 12:36 PM